WW KYOTO, the branch of WorldwideFM is celebrationg 10th broadcasting anniversary.
For this commemorable day, we are welcoming Gilles Peterson who is a founder of Worldwide FM from London!
We have other guest DJ’s including Takechi Yamaguchi from Hachi、Yoshihiro Okino(Kyoto Jazz Massive | Especial Records) and WW KYOTO regular members Masaki Tamura, Yukari BB, Sara Aiko.

Do NOT miss this precious party and enjoy these Jazz master’s talk/play!

Based in London. Founder of Worldwide FM. He was president of TALKIN ‘LOUD, one of the most influential labels in the 1990s, the central character who raised the acid jazz movement.

Over the past 30 years, he has been active as a popular presenter at a state broadcasting station from a pirate radio. Currently he is responsible for weekend at British radio station BBC RADIO 6 MUSIC.  The most influential radio presenter with the most listeners in the world.

In his label Browndswood Recordings, he is focusing on excelling newcomers. Invited to Cuba and Brazil to produce artworks because of his skill as a trendsetter of music, activation of music scene, project of cultural dissemination. Furthermore, the influence on the world music scene is an immeasurable true music revolutionary, such as hosting their own festival <Worldwide Festival> in each country.

A Kyoto native who has been influential in it’s jazz crossover scene for over 30 years, he is currently the owner of record store/ bar Hachi.

Takeshi was one of the original members of Kyoto Jazz Massive and the owner of the legendary Club Collage, which was vital in building the crossover scene in Kyoto. He went on to produce Music Bar Colors and 5th Street Music Store record shop.

As a DJ he plays jazz with a deep knowledge and unique sense.

DJ / a programmer of KYOTO JAZZ MASSIVE— He is also an owner of “ESPECIAL RECORDS” and running a record shop in Minamisenba, Osaka.

Since he established it, he has been always in the spotlight with regards to some wonderful tracks which he released until now like SLEEP WALKER, HAJIME YOSHIZAWA, SHUYA OKINO and so on. And also he is evaluated highly as a DJ tour organizer.

He has invited Many DJ’s & Live Band and so on and succeeded every tour. 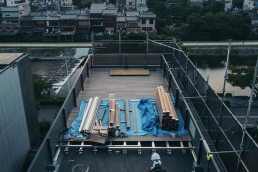